Tracklist:
A: (Do Tha) Diggy B: Let's Get Together

Round two of the latest batch of vinyl from Goodbye Boozy Records is a 7″ titled (Do the) Diggy from Coldwater, Michigan three-piece THE HEMINGERS. It’s their first release pressed to vinyl and hopefully there’s more to follow.

The two tracks on their debut 7″ barely last three minutes, making for two quick and rowdy rock and roll stompers. They’re jam-packed with shredded garage guitars, obnoxious vocals and a propulsive, straightforward delivery that breeds both innocence and simplicity. They use nothing but raw energy and their silly antics to help characterize their short but sweet single, which you’ll learn quickly enough in opener “(Do the) Diggy”.

The track splits open with an electrified guitar solo shoved right in the midst of the madness, exposing an unsettling combination of high-pitched vocal babbles against Ben Lyon’s harsh, raspy wail. The good thing about this combo is that is only lasts two minutes – any longer and we’d probably blow our brains out from insanity. B-side “Let’s Get Together” is a party-ready anthem with some gut-busting guitar shreds, making way for fist-in-air chants and barrels of their ecstatic, infectious energy. Now hear both tracks right below courtesy of Goodbye Boozy!. (Styrofoamdrone)

Up next in the latest Goodbye Boozy grip is this noise-crusted assault from teen rock sensation SICK THOUGHTS. Blood Red comes with three different cover arts on red, white and black, each limited to 66 for a total of 198 copies.

Sick Thoughts is self-described “teenage rawk and roll from Baltimore.” The duo of Drew Owen on guitar and Rob Doesntwantajob on percussion wrote and recorded these songs in the Spring of 2013 on a 4-track in Owen’s bedroom. If you like loud, jagged and in-yr-face punk rock that’s still raw and bloody, then you’re in luck. On top of this jagged little gem Sick Thoughts is releasing a second 7″ on Can’t Stand Ya Records, as well as an LP on Dead Beat Records. The Can’t Stand Ya 7″ is available now (we’ll get to that later) and we’re all still waiting for more details on the LP.

As for this single, it consists of two fuming tracks that together don’t even reach four minutes. It makes for a short listen, yes, but it’s an invigorating mess comprised of blown-out drumming and scuzzy, trashed-up guitars that has this party forever ablaze. Owen’s disgusted vocals are not as unintelligible as you’d expect as he snarls through the gritty roar of the guitar. “Blood Red” opens with his twisted lyrics – “I want girls, I want love/ Blood and murder when push comes to shove” – quickly helping us deem this some of the filthiest stuff Baltimore has to offer. Listen to the A-side track below courtesy of the Goodbye Boozy Soundcloud, then check our upload of the B-side “I’m Gonna Miss You.” (Styrofoamdrone) 
Tracklist:
A: He Never Hit Me B: Little Honda

Released in part by the mysterious Goodbye Boozy label is a fresh single from Orange County surf-psych favorites COSMONAUTS. We covered their self-titled full length back in March and these tracks continue on from that mix flawlessly.

So what we have here is a near five minute single which comes from three different labels (one being Goodbye Boozy), each released with their own cover art and a certain number of pressings to confuse the shit out of people. If you can recall (and how couldn’t you?) their s/t from earlier this year, then you should already know how this is going to turn out. “He Never Hit me” automatically comes through with heavy surf rock vibes and an overwhelming psych twist, combining both breezy summertime notions and a barren, sweltering desert. Pounding drums dismantle everything in their path in unison with paralyzing guitar textures, which proves that Cosmonauts continue to offer these massive, submerging sounds that always end up swallowing you whole in one sloppy, energetic bite.

Flipping over to the B-side, the boys supply an even more invigorating number with their take on “Little Honda”. They take their blazing surf rock to a whole new level with ecstatic solo work and twangy blues vibes which makes for a destructive yet highly gratifying listen. Shattering textures of haze and crunch mix for a catastrophic sound stricken with hyperactivity, hereby culminating into one of our favorite singles we’ve heard yet this year. (Styrofoamdrone) 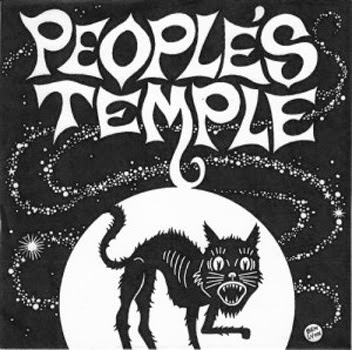 THE PEOPLE’S TEMPLE weren’t silent for too long after their Hozac LP, as they have come back fairly quickly with a brand new 7″ from the mysterious folks at Goodbye Boozy.

While their “Sons of Stone” record on Hozac earlier this year was undoubtedly a bigger and bolder statement, this 7″ surprisingly changes up the scale with a lot less quality in the production department. “Still (The Same)” is a short and totally striped down track, plagued by buzzing and noisy lo-fi growls that stems from crunchy guitars in the shoddy production values. That being said it’s almost like they’ve taken a step backwards towards more simple and primitive roots, which isn’t necessarily a bad thing. B-side track “See Him Go” sees the band moving back towards more familiar territory, where the quivering track nearly sounds like a resurrected 13th Floor Elevators song. For the tracks two minute length, there seems to be a perpetual rippling swirl that never settles down, resulting in a totally relentless and lysergic element added to the mix.

As an extra surprise, the good folks at Goodbye Boozy have a little secret to fill you in for their latest batch of 7″ records. Each of their newest singles comes with a “ghost song” housed on the B-side when there is no real indication of a B-side at all. For this People’s Temple 7″, they’ve added in another track called “Down from the Stars” (which not only nearly doubles the length of the 7″), but sounds more like their roots thanks to it’s glowing guitars and sweeping psyched-out textures. You can thank Goodbye Boozy for letting us include the “ghost song” below, so take advantage of that and go hear it now! (Styrofoamdrone) 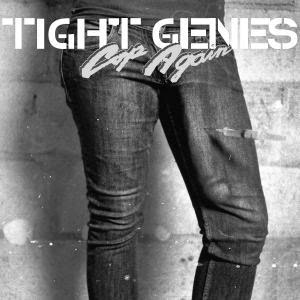 Goodbye Boozy recently released a couple of new singles for the world. The first is from Orlando, Florida’s TIGHT GENES, a band that shares members with plenty of other familiar Florida bands.

Some of those bands include (and are certainly not limited to) Vein Cranes and Hungry Gayze. However, as far as those noisier bands go, Tight Genes seem to forge their own path with a much tidier strand of garage pop with minimal noise and a slightly gritty edge. Granted their sound isn’t totally clean and devoid and filth (see “Rats” with it’s metallic guitar shrill), but a song like “Cop Again” goes to show that these guys have a different goal in mind. The song starts with a wonky bass line and floating guitars before lead singer Noah LaChance chimes in about taking some drugs out of boredom. By now you’ll notice the easy flowing rhythm of this neat and orderly track as the wobbly pop unfolds with menacing keyboards and jangly percussion.

Listen to the single in it’s entirety right below and see how you feel – it takes less than five minutes! After that, it might be a solid idea to go and grab a Tight Genes 7″ while you still can! (Styrofoamdrone) 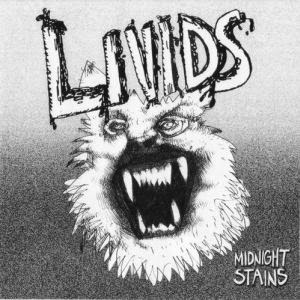 Second edition of 150 on green vinyl.

Praise the almighty punk rock ‘n’ roll gods, for LIVIDS are officially tearing shit up and making everyone that listens holier than a block of Swiss cheese. Hailing from Brooklyn, NY the band has released a whole myriad of singles over the past couple of months from She Likes Zits to Your House or the Courthouse.

There’s one in particular I’d like to mention – their latest one sided 7″ Midnight Stains on Goodbye Boozy. Listening puts you right in the midst of a fiery guitar onslaught, quickly becoming the most invigorating minute and a half of your entire day, pinky promise. I had a chance to get the nitty gritty from lead guitarist Dan Kelley, “I’ve tried to get Eric [Davidson] to tell me what the lyrics are all about but I think it’s just what it says, midnight stains… bodily fluids, beer, wine, whatever…in the middle of the night.” It’s agreed that the lyrics can be left up to your own personal interpretation and imagination. The single was released on Italy’s own Goodbye Boozy Records in a run of 240 copies. They released the single with 3 different cover designs featuring artwork by Livids vocalist Eric Davidson (also of New Bomb Turks), Scott Pickering, and Jeff Glave (based in San Francisco). The 2nd run of 150 copies all featured Jeff Glave’s artwork and if you are lucky you might be able to still snag a copy from Goodbye Boozy.

Kelley alludes to plans for Livids to record again in the near future as well as plans for a possible European tour next year, although nothing is confirmed yet. In the meantime, they have a bunch of shows lined up in New York over the summer. They’ll be playing with The Dictators on May 30th at The Bowery Electric, so if you’re from New York, YOU BETTER BE THERE! If you’re lucky, you might even be able to pick up a copy of Midnight Stains. (Styrofoamdrone)